2014 was a very unusual year, and I neglected my blog as I adjusted to many big changes. I’m not one for new year’s resolutions, but one of my goals for this year is to start writing more reflections on this blog.

Life update: I had been working with the children’s group at a local church, but they caught on fairly quickly that my gifts might lie elsewhere. Last week, I started working with the Friday night college ministry, and with their afternoon Sunday school for their high school students.

One of the most challenging things for me is that I’m facing a group of students who, by and large, have grown up in the church. Given my background, I’m much better at talking to atheists. I get where they are coming from; I know how to talk to them about God. Most of the time, the God they don’t believe in is a God I don’t believe in either! They don’t believe in a God who delights in torture, who defies any logic, who allots salvation like Willy Wonka apportioned golden tickets – utterly at random – and neither do I. We have something in common.

Talking to Christian students is much more challenging, because instead of not believing in a bad God, they tend to believe the wrong things about the right God. And even if they believe the right things about God, those right things often get left at the church doors on the way out. I’m honestly a little intimidated by the prospective of figuring out how to help these students grow.

As I’ve gotten to know this church, I’ve learned a couple of things that worry me. First of all, it’s a church mostly of immigrants, which sometimes signals that members’ sense of belonging to the church may be less focused on faith in Christ and more on finding ways to preserve their culture. Secondly, I surveyed the middle schoolers and found that many (though not all) of the students do not feel God’s presence in the church. That is, for them, the primary experience they have at church is of a community revolving around a particular culture (Chinese) and obligation (my parents will be upset with me if I don’t come). Thirdly, the college students who had a connection to another Christian group (like Intervarsity) seemed on average more invested / spiritually mature than the ones who were only attached to the church. Of course, it was one of those Intervarsity guys who – when asked what book of the Bible he would like to discuss – chose Song of Songs. So maybe my judgments are entirely off-base.

One of the groups would sometimes do an activity called “highs” and “lows” in which they would share a high point and a low point of their week. I think all church groups should have moments like this – times in which we collectively share what’s going on in our lives so that we can stay in touch and offer support during more challenging periods. But after my first “high” and “low,” I realized that it’s a great exercise to build community generally, but not necessarily a great exercise to build a distinctly Christian community. (I think my high was that I started playing Clash of Clans with my family, which bought me street cred with the middle schoolers until they realized I was playing the old version. So I’ll be the first to admit that I failed at spiritualizing this exercise.)

I decided for both the college and high school groups, I’m going to replace “highs” and “lows” with something similar, but different. I’m asking each person to share something that God did in their lives in the previous week. I want to help them develop a sacramental vision to see that God lies beyond the doors of our church, that what they do in the daily rhythm of their lives matters to God, and that if they truly believe what they sing on Sunday mornings, it should offer them comfort and guidance throughout their week.

The first exercise with the high schoolers illuminated the variations in maturity. A couple of the older, more mature students were very insightful (God showed them the importance of helping their grandmother, inspired them with gratitude, or challenged them). One boy said frankly, “all I did last week was sleep, eat, and play video games.” About half the answers were a weekly recap without reference to God. But I hope as we practice this new exercise, they start to develop the vision that lets them see God’s fingerprints in the world around them.

As for me? Well, on the drive to church in the morning, I had settled that I would share about how a talk with two non-Christian friends reminded me that I need to (a) get over my obsession with being “right” about politics and listen better to move conversation to deeper things and (b) spend more time rethinking my political views in light of Christ. I had intended it to be a reminder that God works through everyone – even those who have different religious beliefs from us.

God had another plan. After the morning service, my church offered a morning class on marriage from an older couple I’d gotten to know on my first visit. They seem like a lovely family, and I seemed to get along with the wife as well as the husband (finally!). At the class, the wife shared some of the struggles they had gone through during their 39 years of marriage. She and I shared some uncanny similarities, and I talked to her afterward. It turns out that we processed in very similar ways, and she gave me some advice that will help me figure out how to resolve conflicts in my current relationship better. This came the morning after my boyfriend and I had gotten into an argument of sorts, and it was clear that something needed to change. It brought tears to my eyes to talk to this woman who shared my struggles but had persevered through them. She helped me to see the ways that I need to change, helped me to remain humble, and served as the sign I had prayed for the night before.

Some would say, of course, that it was mere coincidence. I can’t prove that it wasn’t. But with sacramental vision, we can see God’s handiwork in even the most ordinary of things. I pray that God will help grow in my students the eyes to see and the ears to hear. 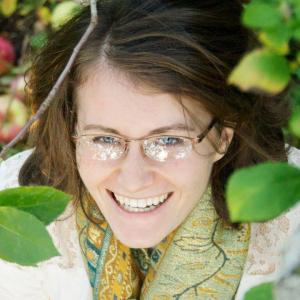